In May, I did a talk for the Ireland Chapter of the Project Management Institute (being a PMP, I’m a member of it). The evening was split into two sections:

In essence, my key messages regarding mobile apps and Project Management were:

The event was fully booked and the talks were well received – we had a set of very interesting questions from the audience. It seems that there is a tremendous interest from Project Managers when it comes to Agile and Mobile Apps.

You can find details about the PMI event here http://www.pmi-ireland.org/event-calendar/event-view along with my presentation slides on slideshare:

We are thrilled that our Special Olympics iPhone app was mentioned in the Exicon Olympics Report “Go for Gold with Mobile Apps”.

Along with mobile apps from NBC, CTV, Coca-Cola, Heineken and Barclay Card, our Special Olympics app (download from the App Store) was reviewed as an example how to stay in touch with athletes at the Athens Special Olympics event:

“The aim was to create a positive association with the team & athletes by integrating athletes profiles, live results, photo galleries, news archives, blog feeds and a donation link, all fed into the app by the athletes.” – Roland Gropmair, mApps.ie 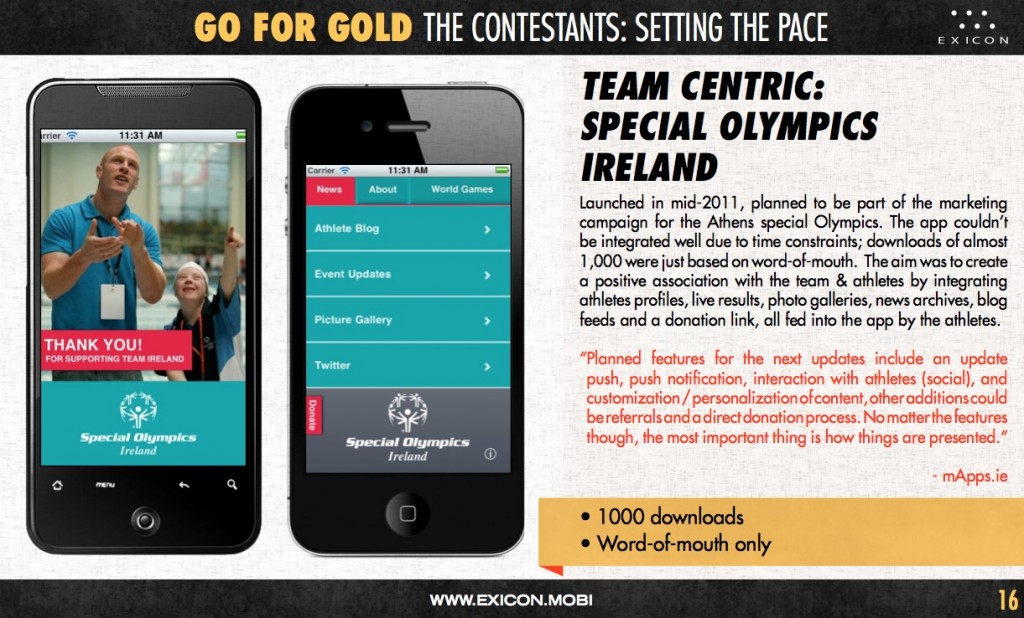 The Model-View-Controller (MVC) design pattern is engrained into many frameworks, and of course also into Cocoa Touch. To put it into a nutshell, MVC separates the management of data (the model) and the display (the viewer), linking these components by a controller. This promotes flexible design and reusability. In other words, if the process where the data comes from changes, the components that display it to the user and allow user interaction won’t have to change.

When I started my little FlipMemory project, a memory game for the iPad, the first release early 2010 was based on UIKit. For the second release in early 2011, I did a complete rewrite, based on the excellent cocos2d-iphone toolkit  (which of course also works on the iPad).

In all the (simple) sample projects I have worked through back then when I learned cocos2d, the code that manages the model was mingled with the view components. So my first approach was to do it alike, and not bother about adopting MVC.

But I was wrong, and therefore had to redesign FlipMemory, and here is why.

1. MVC makes it easier to test your Model – a core component in any app

When I rewrote FlipMemory in cocos2d, I started by creating a class that manages the memory card logic: A deck of matching cards, responding to events like ‘user turned around a card’ , ‘check if cards match’ and ‘reshuffle the opponent’s cards in multiplayer mode’.

I wrapped this game model into a very simple view controller, that consisted of old-style printf and scanf statements. That way, I could play a memory game in the Xcode console   🤗

2. MVC allowed me to add two player functionality to FlipMemory

When it was time to add multi player functionality, I created two instances of the model class. That was it.

Well no, there was a lot more code to it of course… But without having one class that manages the game logic, I think it would have been very hard to add multi-player.

Here’s the definition of the Game class:

and here how it creates the model for each player. While that can certainly be cleaned up, I guess it demonstrates the point I want to make:

3. MVC makes it easier to add new features to your game, because you break down your code into smaller pieces

As Robert C. Martin said over and over again in “Clean Code – A Handbook of Agile Software Craftsmanship”  you need to keep you classes small, otherwise you won’t be able to maintain your code. While I cannot claim that each class in FlipMemory only does one thing (yet), I certainly see the value of that principle.

Whenever I get time, I’m working on small enhancements of FlipMemory (e.g. Game Center integration, level design) – because that’s my testing ground.

There’s a number of very useful resources out there on the web that will help you when you’re developing mobile apps on iOS.

I’m reading a number of blogs on a regular basis, here’s a list:

Other useful sites are: